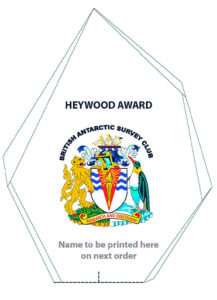 In memory of our late club president Barry Heywood the club created a new award,

This is to be awarded annually to a club member who  has done something that greatly benefits the club or a club member  or members.

The award will be funded via the general BAS Club funds. Jo Heywood  generously donated £1000 to cover the initial costs.

is presented. If circumstances mean that recipients are not able to attend the annual dinners a proxy can be nominated in their place.

The initial draft award was presented to Barry’s wife Jo Heywood  at the annual AGM 2021 dinner.

The award is in the form of an engraved crystal iceberg

There is an awards committee comprising of the

3.   The previous year’s recipient (except for the first year where the Benevolent Fund Secretary will fulfill this role

Candidates will require two club members to nominate them for the award and the nominations should include a short citation.

It is expected that there will normally only be one successful candidate each year but the awards committee reserves the right to award more than one or make no award if deemed necessary.