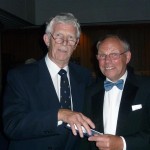 The Fuchs Medal Award Committee met in June and awarded the 2010 medal to Stephen (Steve) John Parker. The winner’s name was announced at the Bristol Reunion but the medal was presented at the Cambridge Reunion in July 2012. Steve was nominated by Gerry Nicholson, and supported by Doug Pearson, and Ian Potten. It would be impossible to print all the comments and anecdotes that were received, but Gerry’s citation below has captured the essential character of this dedicated man.

Steve was Head of Engineering at BAS from 1990 to 2009. He joined direct from the RAF and quickly became an invaluable member of that small team that existed at the time. He brought with him tremendous enthusiasm for his work and he soon made it clear that the Air Unit was going to improve following his arrival and would very soon be second to none, or he would want to know why. During Steve’s stay with BAS the Air Unit was exactly what he wanted, second to none, and a considerable part of this was due to his experience and efforts.

He worked tirelessly during his 19 years with BAS supervising the summer’s Home Base Maintenance, often working extremely long hours with the Maintenance Provider, ensuring that when the aircraft were scheduled for summer flying or were due to depart for the Antarctic Season they were in prime condition. The Maintenance Providers, equipment suppliers and overhaul facilities, Scientists and in particular the remainder of the Air Unit were all, without exception, harassed in varying degrees to ensure all was at a “Parker State” of readiness for aircraft departure South and all knew exactly what was expected of them.

Steve drove himself extremely hard during the summer months and led the Engineering team by example. He set, and maintained, high standards and was not prepared to relax these standards for any reason. He did not suffer fools gladly, and anyone trying to cover up any discrepancies, errors, or deficiencies were very quickly spotted and the miscreant informed of the issue and exactly what was expected of them to resolve the issue and by when.

He was often out of the office for long periods on detached duty at Mann Aviation, CSE Aviation, Anglo Normandy Aero Engineering and then Field Aviation and Rocky Mountain in Canada ensuring that his beloved Twin Otters were being properly looked after, at a reasonable price and were delivered to schedule. He was always the first to volunteer to sort out problems with the operation or maintenance of the aircraft.

Attention to detail were the key words and very, very, little slipped past Steve with respect to aircraft engineering, with his aircraft acceptance checks after maintenance, becoming almost legendary. I once escorted a UK CAA Surveyor on an Audit visit to Rothera to inspect the Air Unit facilities there and ensure they were fit for purpose. Stephen had gone to Rothera in advance to ensure all was well prior to the visit and seemed content when we arrived. The visit was brief, but intense, and we were reaching the final stages of the inspection in the Aircraft Engineers workshop when the Surveyor suddenly stopped, smiled, and whipped open a small drawer tucked well under the workbench. The contents were in perfect order, he could find nothing wrong, and I noticed a small smile from Stephen which indicated all such areas were in perfect order. We received an exceptionally good report for this visit, much of which was down to the attention to detail applied by Steve to his role.

One of Steve’s most endearing, and perhaps most controversial, traits was his proclivity for plain speaking, a spade was a spade, and all quickly knew when something had gone wrong, or was at odds, with the expected “Parker State”.

Over the years Steve was instrumental in the embodiment of a considerable number of Operational Modifications to BAS aircraft which made the aircraft safer and /or easier to operate in the Antarctic and he also had an unerring ability to ferret out urgent spares from the most unlikely sources, and he knew of many, and speed them on their way to the required location.

Whenever Steve phoned me up and started with the words, “we have a little problem, but I have the solution”, then I knew it was going to cost money and would require a juggling act with the Air Unit budget.

In all aspects of the post he was a true FID/Engineer/Fixer, always available, never too busy to help others, always able to find a solution, or know someone who could provide a solution, to any Engineering problem, in fact any problem, and was always prepared to go the extra mile to get the job done day or night.

Finally Steve was unofficially known as the Air Unit Entertainments Manager, a post at which he excelled. Always the leading light in the organisation of, and during, any celebration, he partied hard and worked even harder, last one out of the bar, first one up for breakfast and first one ready for the working day.