New research describes for the first time the role that warm, dry winds play in influencing the behaviour of Antarctic ice shelves. Presenting this week at a European conference scientists from British Antarctic Survey (BAS) explain how spring and summer winds, known as föhn winds, are prevalent on the Larsen C Ice Shelf, West Antarctica and creating melt pools. The Larsen C Ice Shelf is of particular interest to scientists because it of the collapse of Larsen A in 1995 and Larsen B in 2002. 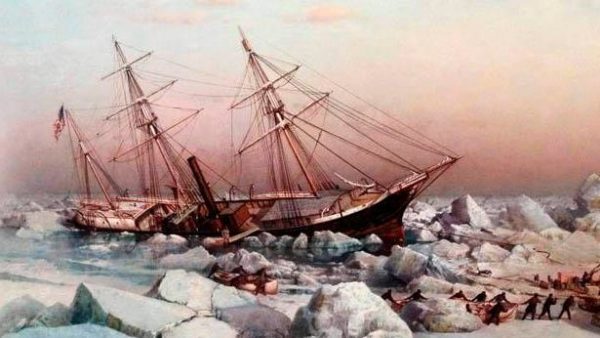 In 1879 the crew of the USS Jeannette became trapped en route to the North Pole, locked in the Arctic deep freeze for two years.

There was not much to do apart from watch out for polar bears and keep a meticulous record of the weather, noting down the barometric pressure, wind direction, sea temperature and visibility. The information in the logbooks that survived the ordeal, unlike two thirds of the crew, is now helping to recreate a day-to-day history of the world’s weather over the past 200 years.

Film premiere of an ‘Antarctic voyage to remember’

Film premiere of an ‘Antarctic voyage to remember’ A film about the work of the British Antarctic Monument Trust to commemorate those Britons who lost their lives in British Antarctic Territory is to be premiered at the Royal Geographical Society on Wednesday 14 June 2017 at 19.00. Bar open from 18.00.  Trust Ambassadors, the polar…

BAS press release: One of the largest colonies of gentoo penguins in Antarctica was decimated by volcanic eruptions several times during the last 7,000 years according to a new study. An international team of researchers, led by British Antarctic Survey (BAS), studied ancient penguin guano and found the colony came close to extinction several times due to ash fall from the nearby Deception Island volcano. Their results are published this week (Tuesday 11 April) in Nature Communications.

Captain Stuart Lawrence wished to let BAS Club members know that it was his sad duty to confirm that Steve Norris passed away in the Queen Alexandra Hospital, Portsmouth at approximately 2000 hours last evening

It is with deep regret that I must inform you that Captain Malcolm Phelps passed away at 0230 this morning, Saturday 8th April 2017, in a comfortable Nursing Home in his home town of Brixham, South Devon, after a long illness. 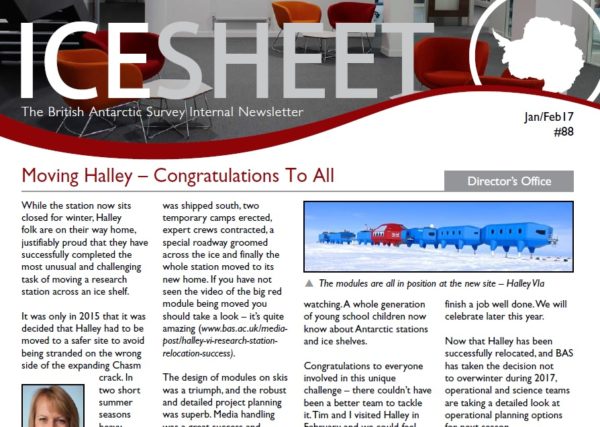 IceSheet 88, newsletter from the AHT, and other news

The latest issue of BAS’s internal newsletter IceSheet is now available on our site. There is an article about the Halley move, recruitment for the RRS Sir David Attenborough, ice cores at Kohnen station, Lyme Regis fossil festival and more…. Club members may also be interested in reading The Explorer newsletter of the Antarctic Heritage…

“Sir Cosmo Haskard, governor of the Falklands and Commissioner for BAT 1964-1970, died recently at the age of 100. David Tatham (also a former Governor) is writing an obituary for Polar News and needs information about Haskard’s activities in the Antarctic. I remember him visiting Signy in 1964/5 aboard HMS Protector and assume he must…

Allan Weardan wrote to say that club member David Cansfield Halley IGY 1957/58 has passed away. The funeral is on the 10th April in Harrogate, details from Allan Wearden if needed.